Part ‘Choose Your Own Adventure’ and part a deluge of contemporary artwork, Lahore’s first-ever Biennale was truly a one-of-a-kind experience. After reading and viewing on social media about the Karachi Biennale, I was quite curious to see what this mix of artists had to offer in Lahore and let me tell you – they did not disappoint!

A friend and I were only able to make it on the very last day, so we covered the installations at Bagh-e-Jinnah ( also known as Lawrence Gardens) and the former Lahore Lit Fest stronghold, Al -Hamra Cultural Complex – both conveniently located on The Mall.

Let it be noted, I risked my life to see Ali Kazim’s Lover’s Temple Ruins public art installation. How’s that for commitment to ‘The Arts”?!  It was upon seeing Kazim’s unusual take on ‘Lover’s Garden’ on Instagram that it was decided to make Lawrence Gardens the first stop.  The risking my life part? It’s coming. A very helpful Lahore Biennale volunteer pointed in the general direction of a tree-covered hill and said that more artwork lies up there. Padding along in my comfy slippers with a thick sole, it was a surprise to find a steep trail comprising of random slate slabs, crumbling red dirt and a few roots branching along the path. With much trepidation, but with an even stronger resolve and a patient fellow-hiker,  we made our way up the hill and eventually to Kazim’s artwork.  On a serious note, future Lahore Biennale events should be curated with accessibility in mind. It does not make sense that any patron of the arts miss out on experiencing an exhibit just because wheelchair ramps, side railings or proper steps are unavailable.  What kind of public art installation is exclusionary?

It strikes you – as if one has been suddenly transported to a remote excavation site. Signs of an older civilization all but gone for some stubborn terracotta hearts. It felt as if one is a giant peering down on a collapsing foundation- moments before all is lost to the ravages of time.

A riot of colors enclosed in a life-size version of child’s diorama, Warda Shabbir’s installation instantly engages the viewer and transports them to her version of the Garden of Eden.  Aside from being quite ‘Instagrammable’, Shabbir’s skill at turning ordinary plastic plants and flowers into a breathtaking 3-D mural is noteworthy.

Noor Ali Chagani’s artwork depicts the impact of societal expectations on Pakistani men. I felt that Chagani’s ‘brick wall’ speaks of the hope that perhaps one day more men will feel comfortable sharing their softer sides.

I adored, ADORED, Salman Toor’s ARE YOU HERE? installation at the Al-Hamra Arts Center. 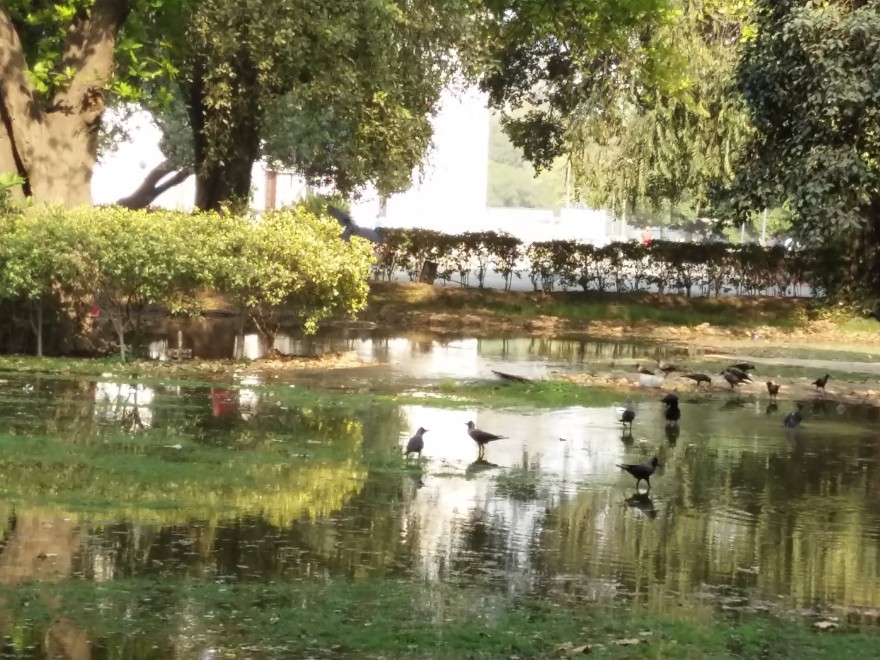 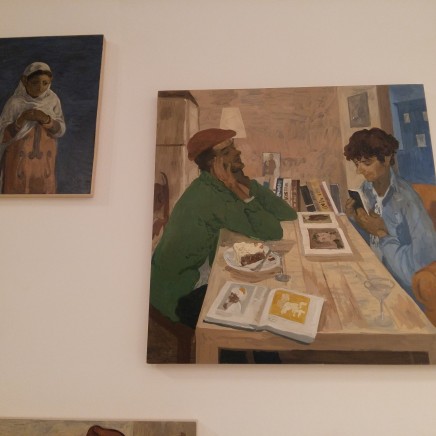 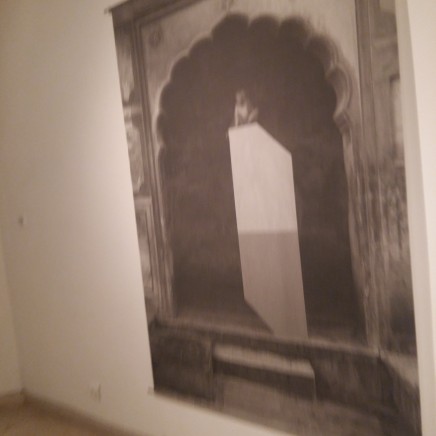 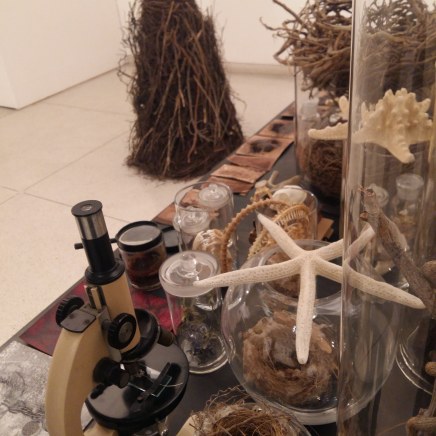 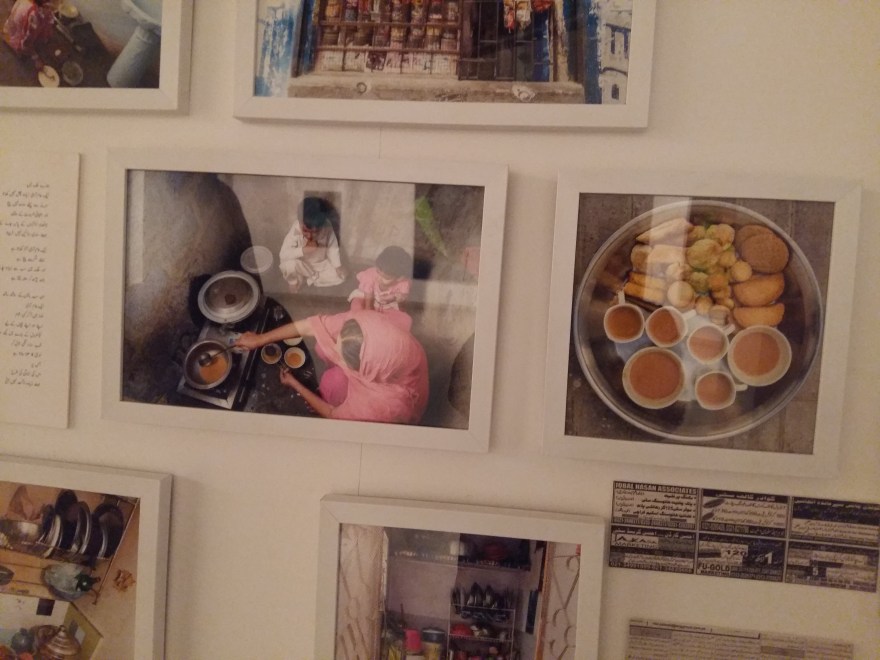 It was supposed to a quick stop. In and out. A check-in. Basically a #keepingupwiththeKhans in lieu of the Joneses. Plus, we didn’t have any other plans this Saturday night.  We trooped into Lahore Eat with minimal expectations and maxing out on  comfy shoes. To our collective surprise, the open-air stadium ground was well-kept, there was a large variety of activities to take part in, from attending a concert to taking part in a renegade rickshaw ride. 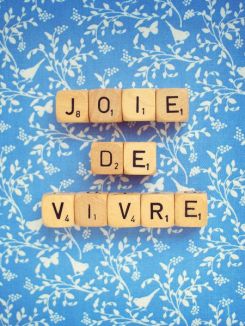 ithout meaning to, our inhibitions started melting away. Something pulled us in… reeled us in. Reminded us of what can not be terrorized out of us. It was our distinctly Pakistani flair for Life –> ZEEST *.

*Zeest is a word from the Urdu language that literally means viability and life.

We live life to the fullest – it’s a gift. We cherish it in every which way: by wearing the brightest colors, laughing a little too loud, singing off-key in public spaces and spending time with those we love the most. Those couple of hours at Lahore Eat became a testament to our collective joie de vivre.

Dance isn’t something that drops from the heavens; it is a living, evolving tradition and conservation of this tradition lies in constant, responsible change, not in cementing the norms. There is a complete paranoia that we are going to lose our heritage if we expand its boundaries, but we will actually lose it only if we put it in a museum and don’t let it breathe.

‘Dance has to breathe’ – by Pooja Pillai

Sound that You Can Wear

SubPac is creating its own physical-sound category through two unique products: the SubPac M2, a wearable vest, and the SubPac S2, a seatback device. Similar to sub woofers in the back of seats, when you wear this wearable, which is similar to a backpack, you literally feel the low-end frequencies throughout your entire body — and you can take it wherever you go. The startup has attracted major investors and industry leaders who have joined forces to engineer this sound movement.”

Our 30s are the decade when friends disappear.

Distracted Users are the New Normal , Design for Them

‘Debating the relative merits of a more distracted versus a more focused society is about as worthwhile as kicking rocks.  … What does that mean in practice? Expecting that any opportunity your UX presents for distraction will result in divided attention, for one. Here’s a list of what that means:

The Brilliant Mechanics of Pokemon Go

‘Amid the entire play session, the game has to stay open. That keeps you from getting distracted and flipping out to other apps. I find myself walking with my phone in my pocket, but with the game open often enough while wearing headphones. Whenever there’s a chime, I take the phone out of my pocket and start playing — whether that’s collecting Pokéballs or trying to capture something new (or some crappy junk Pokémon for the sake of experience). The game world is vibrant and beautiful, making it something easy and fun to see. It’s filled with flair and flashes that are visually stimulating and signal new elements of the game. All this makes the player want to keep their eyes — or ears — glued to their phone, ready to engage with it the moment something new happens.’

‘I needed VR to get away from the augmented reality of Pokémon Go.’ 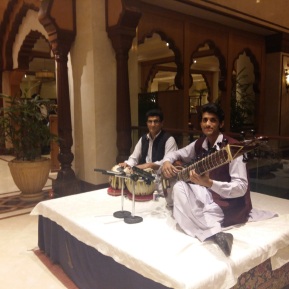 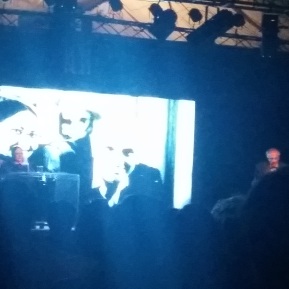 The security situation leading to a change in venue and the shift from Alhamra to the Avari Hotel’s grounds ended up making a quite a difference for this year’s Lahore Lit Fest.  Not only was the trademark art exhibit missing, there was a distinct shortage of wares and cultural activities to engage LLF-goers not attending the on-going sessions. I wonder why the Rafi Peer crew were no where to be seen. Their exhibit in the main hall, with a plethora of colourful puppets on display and a variety of publications describing events at the Peeru’s restaurant and theatre, was sorely missed.

Where were the LLF volunteers providing pamphlets and booklets with the programs printed? The LLF stamped mugs, tees and tote bags? The yearly special edition of Newsweek Pakistan with stories dedicated to the event.   The offering of books were adequate with Readings and Liberty Books having the widest variety available. However the smattering of complementary stalls were quite sad. Aside from the Desi Writer’s Lounge, the other stalls were boring or had little to offer. Speaking of which, where were the folks from The Missing Slate?  This being the fourth year of it’s existence, it may seem a bit extreme to sound so nostalgic, but this gives credit to the organisers who managed the earlier events effortlessly.

A.R. Gurney’s ‘Love Letters’ was performed by Rehana Saigol and Imran Aslam on Saturday, 20th February at the Lit Fest. Looking a vision in her sparkly dangly earrings and ruffly black dress, Saigol effortlessly transformed into the sensitive yet witty Melissa, the heroine in the duo. Aslam aptly played the responsible yet love-lorn  Andy Lad the Third, whose persistent letter-writing wins the heart and soul of Melissa.

The musical interludes that punctuated sessions of letter-writing were tastefully selected – punctuating the innocence of childhood kinship or heating up the beginnings of a lustful affair-  with the musical stylings of the greats such as  Elvis Presley and Diana Ross at service. Arif Mahmood’s photos were sweet additions to the tenderly enacted romance on the LLF stage, documenting Melissa and Andy’s interactions from the cradle to the grave.

The seating capacity for the play underestimated the demand for live theatre as the organisers hastily lined up chairs to fill up the back of the hall.   Even then, another three hundred LLF goers we 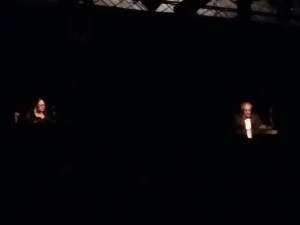 re barely kept outside the hall, with youngsters asked to sit up on the carpet , front-row, to empty chairs for adults.

I hope the play organizers have understood the enthusiasm for live theatrical performances and will stage such performances on the regular, preferably at more easily-accessible venues.

December has been rough, especially rough, on human race.